The Story Of Us Part III

Picking up where we left off... (If you missed the posts leading up to this one, click here for Part I and here for Part II ).
Jeremy and I moved to Colorado Springs in August of 1998. He got a job as a propane delivery driver and I started paralegal school in February of 1999. It was a six month program for anyone who already had a Bachelors Degree, so I graduated with my paralegal certificate in early July, 1999. I got hired by a law firm to do basic legal secretary stuff a few months later. I was just happy to get my foot in the door.
Sad to say, this position did not work out and I was back looking for another job. Jeremy was still selling and delivering propane, but being a physical job, it was really taking a toll on his already injured back. I got another position in another law firm being a legal secretary again. I enjoyed the work I was doing and, again, was happy to have my foot in the door. But I was really having a hard time working for attorneys that did not see me as a person, let alone a valuable employee. I quit that job after a few months and started looking again, thinking I must have just run into a couple of not-so-nice lawyers and there were greener pastures ahead.
After going on multiple interviews, I came to the conclusion that the business of law was not for me at that time, and I got a job as a bank teller (what I did in Pagosa Springs after Jeremy and I got married). I left the door open for the future, but I was tired of being unhappy, so I went back to doing what made me happy. Trying to make a long story not so long, I haven't used my degree in a long time and I'm not sure if I will again, much to my family's chagrin. :)
Jeremy worked in propane until Summer 2001. Because of his disability from the Army, he was granted up to four years of school through the VA's Vocational Rehabilitation Program. This program retrains veterans who might not have real world job skills (Jeremy was a tank driver in the Army... now there's a job that transfers to the real world! ;) He decided he wanted to go into electronics and computers. He went to school and received two Associates Degrees. He got a job with HP as a computer help desk technician in January of 2004. He then started working on Fort Carson doing the same thing in May of 2007 and has been there ever since. He is SO in his element, working on an Army post with soldiers, fixing their computers. Its like being in the Army but you don't have to obey their rules or get deployed. :)
When we first got married, because we were so young and broke, my mom wanted us to promise we would not try to have a baby until we had been married at least three years. Well, three years came and went. So did four, five, six, seven and eight! We were financially unstable, living in a tiny rat-hole apartment and just having fun being a young married couple. 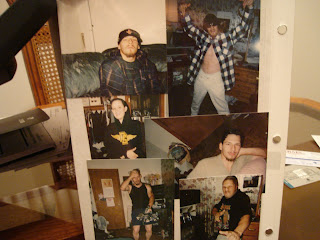 Be sure to click to enlarge the pics so you can see how crazy we were before Marissa! 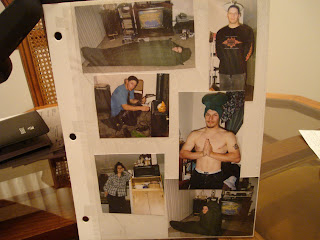 Partying atop the Stratosphere Tower, Las Vegas. Yeah, we both were pretty intoxicated! 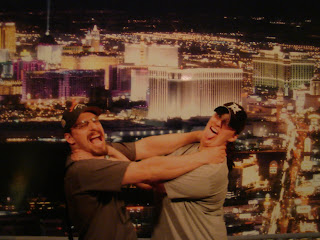 We weren't ready to have a baby yet. Anyone who tells you that old saying "if you wait till you're completely ready to have a baby, you'll never have one" is lying. We were told that many times and we are living proof that it is untrue! In November of 2004 we purchased our first home. Jeremy and I were both finally in stable jobs and we started trying to get pregnant in the Fall of 2005.
I found out I was pregnant the Friday before Mother's Day, 2006. We told everyone we knew right away, of course, having waited so long and being so naive. I started bleeding two weeks later, just before Memorial Day. I lost that pregnancy, but in that short amount of time, Jeremy and I already felt like parents. It was so hard to deal with.  We still get very sad about losing that baby and I don't think we will ever get over it.
We waited four weeks for me to heal and our doctor said we could start trying again as soon as we were emotionally ready.  I got pregnant the first time we tried. I know, TMI right? ;)  We found out July 29, 2006. We told no one, not even family.  Three weeks later, however, I was forced to explain to my boss and co-workers why I was needing to go to the doctor a lot all of a sudden.  I started bleeding and it seemed like this baby was going to be taken from us too.
More to come...
(I love keeping you all in suspense! ;)

My goodness how time flies! There's a lot of history in the last 11 years since you guys got married and yet, it doesn't seem that much until you see it written. Wow! Thanks for the walk down memory lane....love you guys.
Love,
Nana

So I know how this story goes and I still feel the suspense...lol
Love you guys'
Aunt Taters

Nice with the suspense, it think I know what happens???? :)

We had some blog catching up to do. With Bubby's arm broken, the internet has been difficult. Just remember that even when we don't comment, you are always in our thoughts. Thank you again for the blog. It helps us feel more involved your lives.
Love Bubby and Zeyda

I agree with Aunt Taters on this! I know how it all comes together too, but still feel a little anxious for the next chapter in the life and love of Alicia, Jeremy and Mariss!

PS: Do you remember "The Adventures of Manifold Max???? Great times! Plus that old couch that was as old as me!?!? Wow! That seemed like forever, but it wasn't really that long ago!

I can tell you've been reading Twilight by your use of the word chagrin. ;-)I could be wrong....
but I hope I'm not!!!

You do have a beautiful story. And what's even more beautiful is how evident it is that you and your sweet hubby are still so in LOVE! Marissa is flourishing because of it!!!
Jen :)