I will probably anger the universe by posting this and thus, bring some major bad doo doo to our house, but I am also knocking on every piece of wood I can find. (I am definitely NOT superstitious in the least little bit, by the way ;) 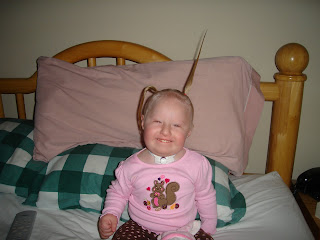 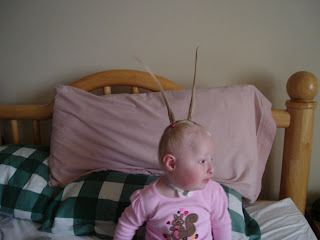 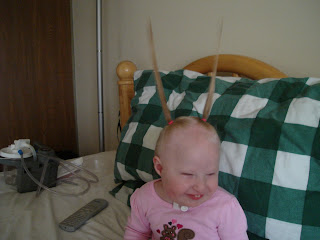 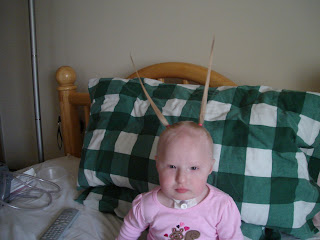 Grandma in Utah, just so you know, your son had nothing to do with this one. I acted alone. :)
Marissa having a blast walking, signing and dancing

I do realize that this song is not exactly appropriate for an almost 21 month old to be listening or dancing to. I personally really dislike this song but Marissa loved the beat and for the sake of shooting a cute video, we played it. :)

Marissa cracks me up!! ROFLOL! She is such a HOOT!! She's gotten her love of music and sense of rythm from BOTH sides of the family! And the HAIR!! That is just too darn funny! You realize when she's much older..she's going to hate you for that! LOL. Ahh...but isn't that what being a parent is all about? Doing silly things with your toddler that THEY will be mortified about (on the outside...laughing on the outside..but she won't want YOU to know THAT!) in the future! And she is so darn SMART!....knowing even MORE signs for things...WOW...Love you all!
Love,
Nana & PaPa

No doctors in a month and a half is HUGE!!!!! Yay for health!
and Yay for rythm!

That song cracks me up! She was really dancing at first, but then you take out the camera and boom! No more!

Love the hair and love the first video with that song! She is too cute!

YAY!!!! A whole month thats so awesome.....I cant believe all she has went through and overcame she is so amazing...Absolutely adorable too. I think I've said that before but my goodness she has me and my husband in stitches!!! I love the pictures of her crazy hair. She has such a wonderful personality!

WTG Marissa! No doctors, that's awesome! (Just between Marissa and I - I think your Mom needs a doctor more than you do. Look what she keeps doing to your beautful hair! Time to start thinking about payback...shhh!) Really, her hair should be reported as lethal weapons, they look sharp;)

You all are hilarious.

Ok, the hairdo made me blow soda out my nose!! That is too funny!

The dancing was too cute for words too! I am going to have to get a video of Will dancing too, I think it is a hoot!

Way to go Marissa!! No doctors for a month is HUGE!! You go girl!

I knew it wouldn't take her long to get her dancin groove going. You'd better watch out cause this child is going to "get down with the get down".

And by the way, when she comes home from school in the 7th grade with her hair spiked... you might ponder where she got such an idea! Hmmm I wonder? LOL She's going to get you guys back one day.

Kiss that baby for me and you and Jeremy give each other a big hug. I love and miss you guys so much.