**ETA** This all happened yesterday but I couldn't post until today because our internet was down.

So... I had a great idea to entertain the kids this afternoon. They were both going a little crazy and I decided it would be fun to take them across the street to the movie theatre, which has a cool water jet fountain for them to run around in. It was about 78 degrees but very sunny and humid because of the massive rain storm we had yesterday and last night, and I thought this would be awesome fun for them. So I started to get them ready.

I stripped Rissa down to her diaper, (yes, we are still working on potty training **beating my head against the wall**, but that's a story for another time) took her out on the back patio, and got her sprayed with sunscreen. Next, I got Sully out there to do the same. Before I could squirt the first spray of sunscreen on him, Rissa reached up and shut the backdoor. A cold shock of panic immediately ran through me, as I realized the door knob was locked from the inside and I had no keys and no phone. It was about 2:15 pm at this point. Sully's mom comes to get him at 4:30 and Jeremy doesn't come home until 5:00. AAAGGGHHH!!! I sat down on the patio swing for a moment, trying to figure out what we were going to do.

Really, the only thing I could do was take the kids, Sully in a diaper and t-shirt and Rissa in only a diaper, all three of us with no shoes, and knock on neighbor's doors, hoping they were home and would let us use their phone. We went across the street and knocked on the door. No answer. We went back across the street and up one house and knocked on the door. No answer. I knew our retired neighbor to the back of us was probably home, so we walked back down the sidewalk and around the corner to his house. Luckily, Larry was home. He let us in, gave the kids cookies and drinks and let me use his phone to call Jeremy. We had a nice little chat about the state of the Union while Sully sat there calmly and Rissa ran around Larry's living room like a crazy woman.

By this time it was 2:45. Jeremy went to his boss and said "My wife locked herself and the kids out of the house". Almost before he could finish what he was saying, his boss said "GO!". His boss is the absolute best! We left Larry's house and came back to our backyard and sat on the patio swing until Jeremy let us in about 3:15. Whew!!

We were so lucky in so many ways. It wasn't too hot or too cold, it wasn't raining, both kids had fresh diapers, we had sunscreen, and we had a very nice neighbor to take us in during our time of need. Even though it was a pain in the butt at the moment, we can all laugh at the situation now, because it could have been so much worse. Now I have a very funny story to tell.

And now I am going to have a beer. Or three. 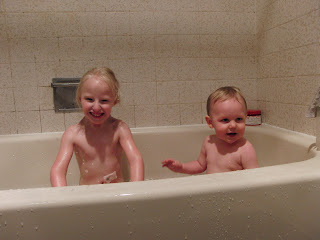 I put the kids in a bath to cool off and to wash the sweat and grime off. As you can tell from the water coming down the outside of the tub, they had a great time! 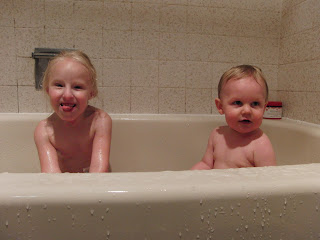