UPDATED BELOW
A little update on the hip situation:
First, I was able to get Marissa's hip X-ray order without having to go back into the doc's office. Let's just say I am really impressed with her new pediatrician. He did not get the message about us leaving his office without an order until Friday morning. But, when he called me Friday, he let me know that he woke up in the middle of the night with the thought that we never finished talking about Marissa's hip issue. Don't get me wrong, I felt bad for the guy. But to me, that just shows how dedicated this doctor is to his patients. This was his first time meeting Marissa and he woke up in the middle of the night thinking about something he had missed in his appointment with her! WOW! I think he is a keeper!
Jeremy and I took her in for the X-ray on Monday when he was off work. Things always go much smoother when Jeremy is able to go with me to appointments. As usual, she threatened to throw up several times, snuggled on my shoulder (which I don't mind at all!), and cried the whole way through the X-rays. She even cried "Owie!" a couple of times, even though there were absolutely no owies. Poor traumatized thing! I wonder if she is ever going to be even alittle relaxed in a doctor's office or if we have emotionally scarred her for life!
Well, her ped's office called back this afternoon and said the X-ray shows some hip dysplasia and they want her to see an orthopedic surgeon. They gave me the name and number of a ortho who works with kids and has a passion for special needs kids. Perfect! We love those kinds of docs! I called her office and the receptionist said they could get us in tomorrow morning at 8:15! I said "wow, I didn't think we would be seen that soon!" and the lady said "It's important we try to get hip appointments in quickly. Hip problems are not good." Well that's great and all but now I am really freaked out!
So, I would really appreciate your prayers for my Li'l Punkin tomorrow. In the very least, I have to deal with a very upset, crying, and trying to puke Rissa. In the worst, we are going to be told she needs surgery. I don't know what I'll do if that is the case.
I'll update tomorrow when I know something. Thanks friends! 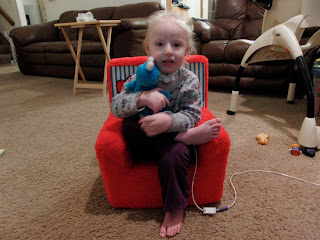 UPDATE:
We just got back from the appointment with the ortho. First, there was no mention of surgery, thank God! The doc had Marissa lay down on the table and try to demonstrate how her hip pops. Marissa knew just what to do when we asked her to pop her hip and the doc was able to feel and see it. She said that based on the exam and the X-rays, Marissa does have mild hip displaysia. She wants her back in physical therapy and she gave us a script for a shoe insert called Pattibobs. We picked those up, to the tune of $70 (insurance does not cover). She wants a repeat X-ray and an office visit in six months. That's it! Overall, a good visit. Marissa did throw up the tiniest bit as I was standing at the desk checking us in. We hadn't even been in the doors for 10 seconds before she started freaking out! Oh well, I'm just thankful the appointment went so well!
Thanks for checking in, friends!

Poor Marissa!! I'll be praying that the appointment goes well and that surgery WILL NOT be needed!

BTW, I didn't like the title of this post.....it reminded me that I need to start exercising! YUCK!

I LOVE this picture of her sitting with her leg proped up on her left knee...she looks so grown up! How cute! You and Marissa will be in my thoughts and prayers all morning and I'll be anxious to know what is being recommended...try to get some rest tonight...even though it's tough.
Love,
Nana & PaPa
P.S. A very appropriate verification word...pirkedo...Marissa is a pirkedo! LOL

That sounds like a great doctor!! I love that he cares about Marissa so much. It seems Marissa and Ava need a long break from any medical place. Poor kiddos.

Oh my goodness, what an amazing doctor. I hope that the ortho in the morning has good news for you. We just had our ortho appt TODAY for this same exact issue! Luckily, Peanut's hip dysplasia hasn't gotten any worse over the last six months so we are still putting off surgery. I hope you get equally good news!

I'll be praying for no surgery and the appointment goes well.

I will be praying for you guys. I hope that the appointment goes well.

that defintitely is a sign of a great doc. My ped tells me all the time that she was thinking of Jax at a random time. I'm glad they were able to get you in quick, lets get this taken care of and move on. Hopefully she does ok at the doctor!

I'm so glad she won't be needing surgery! Hopefully the therapy will help her a great deal. Isaac is becoming more aware of the dreaded doctor's office too. I keep thinking we need to start taking him somewhere fun for a change:)

Yay!!! So happy for the good news!

I was just now able to read your posts. I'm so glad everything went well with the ortho doctor and no surgery is needed right now. That is awesome. She will still be in our prayers so that things will get better not worse.

I love this picture of her! So super cute!

So glad she doesn't need surgery!!

Glad to hear that there was no talk of surgery! What a relief! Thanks for the update! Have a great weekend! Hugs!!!

Glad to know that the hip thing was able to be delt with with out surgery. Poor girl and doctors. Maybe later in her life she won't need to see so many so often.

Phew! She and Peanut must have been channelling each other. :)