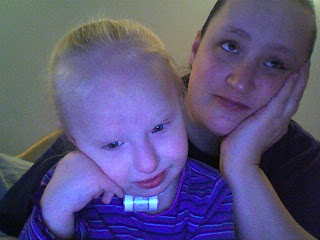 Update: The appointment actually went better than I expected. Tons of crying, plenty of threats to throw up but she never did. I'm sure this is in large part due to the fact that she had already digested her breakfast formula and did not have much to throw up but water, but it sure wasn't for lack of trying! The new doctor and his staff are great! He gave us a referral to see a nutritionist, so I will be calling to set up an appointment tomorrow.
The only problem we had is, I mentioned to his MA and to the doc himself about her hip. Since it was the first visit, there was a lot of medical history to get through. By the end of the appointment, we had both forgotten it and we left without him letting us know what he thought we should do. I called back as soon as I got home, and spoke to a nurse who at first told me that he would want to see her for it. I explained we were JUST in there and he did examine her, I just left without an order for an x-ray or an ultrasound. She said she would have him call me and I am still waiting for him to do so. Please, PLEASE, P-L-E-A-S-E do not make me bring her BACK in just to get an order! Ugh.
Marissa was actually very sweet and laid her head on my shoulder the entire time I was talking to the doc. She never sits still and cuddles with me unless she is sick or feels threatened, I guess. She would not take her eyes off him the whole time. It was kind of cute. By the time we got back to the car, I could tell she was pretty pooped. It was two hours past her normal nap time but when I got her home, I took her up to bed and she zonked out pretty quickly. A short nap is better than no nap!
Oh, an Jeremy's presentation went well too! : )
ORIGINAL POST:
Today is going to be a challenge, that's for sure. First, Jeremy has a big presentation at work. He will be presenting to about 100 people (he feels your pain, Michelle!).

Second, I have to take Marissa to meet her new pediatrician. Since the appointment is at 11:30, she will most likely be skipping her nap. Ugh. She also has EXTREME high anxiety about doctor's offices. She cries, coughs, gags, and makes herself throw up on most occasions. No amount of coaxing, back rubbing, holding, hugging or kissing by me ever makes any difference. She doesn't trust me because I am the one who brought her to this awful place of torture in the first place. Since this is her first appointment with this doctor, he is going to do a full physical. This is going to send her over the edge.

I am going to raise a couple of concerns that Jeremy and I have about Marissa. First, she has been popping her left hip out of socket for a couple of weeks now. She is already at risk for hip displasia because she was frank breech in the womb. She passed a hip ultrasound before she was discharged from the NICU but the doctors said this could be a problem that might come up at any time in the future. Please pray that it is an easy fix.

We are also trying to see if there is a way we can help her gain weight. To be a good candidate for the reconstructive surgery she will need to get her trach out, the bigger she is, the better. She has been holding steady at 27.5 lbs for a long time now. We need to do something to pack the pounds on this girl!

Please pray that I can keep it together today. It is so hard on this Mama's heart to know how terrified of doctors my girl is.

As my good friend Ronnie reminded me today:

"No, in all these things we are more than conquerors through Him who loved us." Romans 8:37. "I can do all things through Christ who strengthens me" Phi. 4:13. Today, remember that whatever task or challenge lies before you, you can overcome and conquer THROUGH HIM!!! Don't attempt to walk on your own - seek the One who will overcome!!!"

I will be thinking about you two and praying for an easy first encounter with your new doctor. I know this is a BIG challenge for you and Marissa, and I'm sure that she's not the only patient the doctor's office has seen that reacts this way. Do remember those profound Bible verses...repeat them to yourself...or even out loud if need be...at the times that seem the most challenging today. In with the good air...out with the bad...as you repeat those verses. I'll be anxious to get a report. And not to overshadow Jeremy and his presentation, I will be thinking VERRY good thoughts for him...I know he'll do an EXCELLENT job! He knows what he's talking about...whatever it is he's talking about...lol....love you guys
Nana & PaPa

Great words of advice from your friend Ronnie!

And, what a great picture of you and Marissa! Too Cute!

I hope and pray that Jeremy's presentation goes well and that the doctor visit went well too! It must be so hard to watch Marissa feeling scared and anxious at doctor's offices! Just the thought of her being distressed makes me sad! Poor girl and poor Momma!

Hope you like the new doctor and that there is nothing seriously wrong with her hip! I'll be praying! Love, Hugs and Prayers!!!

Glad to hear the appointment went ok and that Jeremy's presentation went well too!
I don't feel so bad only having to give my presentation to about 30 people and 3 docs! Glad that's done!

That sucks that she hates the doctor so much when it has to be a frequent thing. Does she freak out in hospitals too?