Stand By For An Exciting Announcement...

Who is now a civilian government employee? 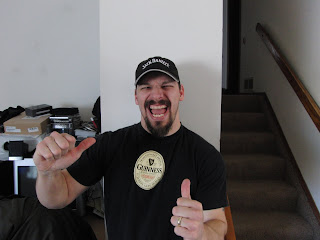 ^
^
^
THIS GUY!!!!
That's right folks! My husband, who has been a government contractor with very little job security and mediocre benefits for years, who has been working toward securing a permanent government position for over a decade now, finally reached his goal!
This means big things, not the least of which is that Jeremy's job is finally a career. He has job security, great benefits, awesome opportunity for advancement, and can pretty much work anywhere in the world where there is a U.S. government or military installation.
Jeremy wanted to wait until he is sworn in on the 28th before we announced it, but he got a phone call today saying that he passed his drug screening and it is official, so he let me tell the big secret today. YAY!!!!
Can I tell you how proud I am of this guy? 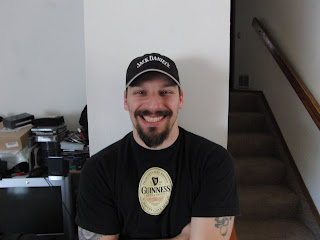 Can we say....Whooop Whoop Whooooop!! Yaaahhhooooo!! Oh Happy Day!!! WOOOHHHOOOO!!! YYEEEEHHHHAAAAAAAAAAAAA!!! MAGNIFICENT!! AWESOME!!! YIPPY SKIPPY DO DAH!!! HOORAY HOORAY!!! OH YEAH!! TOTALLY TUBLULAR DUDE!!! FANTASTIC!! LET'S HERE IT FOR THE MAAANNNNN!!! GROOOVY!!! OUT OF THIS WORLD!!! JEREMY....YOU....ARE THE MANNNN!!! CONGRATULATIONS!!! YOU'VE WORKED LONG AND HARD FOR THIS GOAL AND DREAM....AND IT'S NOW A REALITY! WE COULDN'T BE HAPPIER FOR YOU...YOU DESERVE IT BIG GUY!!! CONGRATULATIONS AGAIN!!!

YEAH!!! Congrats! We are so happy for you guys! Just awesome! You so deserve it!

Fabulous!!!!!! That's great news. I can tell your planning a big celebration!

Congratulations, Jeremy and Alicia!!!! (and Rissa, too!)

Congratulations! So happy for you guys! :)

Yay! Great news. So happy for you all.

Congrats!! I'm so happy for you guys!!! How exciting!

Though I have never met you, I certainly have followed your loving care for Rissa Roo on this blog for a long time and am so happy for all of you in securing a good job to support this family. Job security is a true blessing in these times! Horrah for all of you!

Yay! So totally awesome! So happy for you guys! I now have a better feeling about the government....ok, I like you guys so that's about the extent of the good feeling.... haha! Congratulations!

I was going to say exactly what Nana and PaPa said....

Wow..you deserve it. We are so proud of you.

We are so proud of all of you - congrats Jeremy. What a load off your terribly busy mind!!! Enjoy your new career!! Love Uncle Norm and Aunt Teri