Marissa took her first unassisted steps the other day!! And she stood unassisted for 5 seconds (thanks for the help Auntie Chelle!). That might not sound like a lot, but for her it is huge.

She only feels comfortable walking back and forth between two people at this point and really only takes two steps at a time, but we'll take it. I think part of the reason she is not walking more is a lack of confidence. It is really funny to watch. Her facial expressions say it all. We'll start her off by having her stand facing one of us, with the other one of us behind her holding her hands. She'll have a smile on her face and when she feels us let go of her hands, she gets a look of panic on her face. Then she figures out it is not so scary and with the coaxing of the person in front of her, she starts moving her feet. She'll take her two steps, stick out her little bottom to balance herself, and reach far out in front of her for the other person's hands. Then if we don't reach out to her, she'll plop down on her bottom, sit there and look at us as if to say "well, did I do it?". We'll start clapping and whooping it up and she beams so proudly! The other night we played this game of catch for five minutes. We will try to get video of it to post but, as you can imagine, it is hard to capture since both Jeremy and I are playing catch.

I also think that the assistance of the AFO's (Ankle Foot Orthodics) or leg braces as we call them, are greatly responsible for this new skill. Marissa has many issues with her muscles, ligaments and joints not working properly, even sometimes working the opposite way than they should. Her physical therapist has done a phenomenal job with her, but she still needs some manipulation that she can't give her. We actually picked the AFO's up at the beginning of the summer, but due to multiple problems with them breaking and not fitting right we have not been able to use them properly until recently. We add an hour each week to her schedule to get her to tolerate them and ultimately she will wear them for 8 hours a day . Next week we'll be half way there with her wearing them for 4 hours.

Here are a couple of pictures and a video of her wearing her braces. 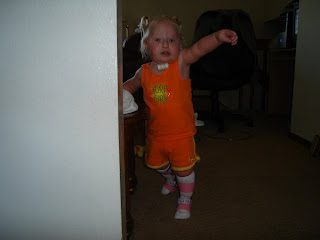 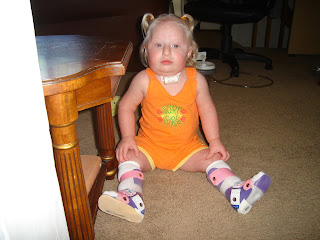 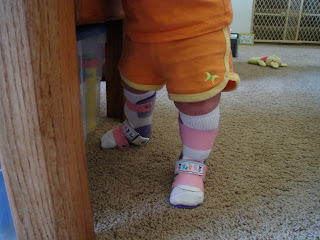 You are welcome for the help! It was great to see her stand there for 5 seconds without anything! I'm glad she is doing better with walking! Soon you'll really need to figure out how to keep her from going down the stairs in the kitchen and entry way! Oh boy!
Love you tons!

Marissa looks great. She will walk
more - just wait!! Then you will have to put everything away!!
Hang in there - Love Uncle Norm and Aunt Teri