Many of you special needs parents, if not all of you, know about Signing Time. Marissa loves these videos, as I have mentioned in the past. I really think her vocabulary and signing ability has taken off like a rocket since she started watching the videos several months ago.
Rachel Coleman is the host of the show and she writes the songs that go along with the programs. If you know about signing time, you know Rachel's motivation behind doing the Signing Time program. For those of you not familiar, Rachel's first daughter, Leah, was born deaf. They found out when she was one year old and started signing with her. Rachel and her sister, who has a son one year younger than Leah, came up with the idea for Signing Time. They did research and found that teaching babies and young children to sign has many, many benefits.
A few years later, Rachel became pregnant with her second daughter, Lucy. During a routine ultrasound it was discovered that Lucy had hydrocephalus, spina bifida and a Chiari Malformation. The Chiari Malformation was corrected when Rachel and Lucy underwent a rare in-utero surgery. When Lucy was 9 months old, she was diagnosed with Cerebral Palsy. Doctors told her parents she would never walk, never talk, never sign and would be considered intellectually disabled. Lucy's parents decided to try to prove the "experts" wrong and started signing with her and including her in the taping of the Signing Time shows. Boy, did they ever prove everyone wrong! Today, Lucy is 8, uses a wheelchair, is in a mainstream class at school, and signs and speaks very clearly.
Rachel has written many songs dedicated to both Leah and Lucy. I wanted to share the lyrics of one in particular because it touches on so many things that we special needs parents have gone through and are still going through.
Shine

Sometimes I see you stuck

For such a long time

A daily nothing new

With lists of things you’ll never do

Until somehow you do

The days and months and years,

Is it just one day? Or is this forever?

You’ve taught me in your lifetime

More than I’d learned in mine

Shine your light on me

I’m so glad you are mine

And you’ll shine in your own time

Well, maybe I’m too close to see you clearly

Or is it now my role to simply believe?

You’re just one of those mysteries

That may never be solved in time

And they’ll do it in their own time

Shine your light on me

And everyone will see

I’m so glad you are mine

And you’ll shine, and you shine 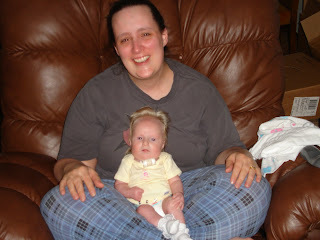 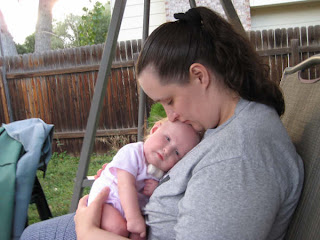 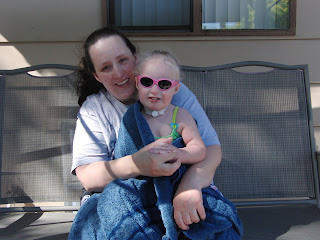 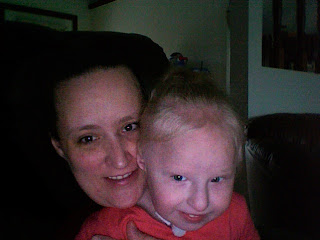 Don't always believe the "experts". Keep up the therapies and hard work and let your kiddos show the world their potential. Keep speaking and signing to them, even if you think they aren't getting it. They just might surprise you.
Let them shine.
***************************************************************
I have a prayer request. Jeremy's mom knows a family with a little three year old girl named Maryn. Jeremy and I actually met this family several years ago before Maryn was born.
Maryn was diagnosed in June with an inoperable tumor on her brain stem. Doctor's have given her 9 to 12 months to live. Her parents are searching out all options and have found a clinic in Houston that will allow Maryn to participate in a clinical trial which may save her life. Click on this link to watch a video to learn more about this precious girl.
If you go to her blog, you will find out ways you can help Maryn's family raise the money it will cost to get her this life saving treatment. If you live in Utah, there will be a benefit concert on August 22. If you live in Colorado, there will be a 5k run/walk on August 29th.
Please keep Maryn and her family in your prayers.
Thank you.

I love you guys! Riss is so lucky to have parents like you :) parents that let her SHINE! I am so happy she is in my life cause when she shines my world gets brighter too!
Auntie Taters

Wow....a HUGE thank you to Granma Utah for finding signing times videow for little Rissa Roo. What a gift and blessing for her. Marissa DOES shine in our lives...and she HAS broken molds and shattered expectations beyond what was speculated. Keep up the good work. I will pray for Maryn and do what we can to help out. Love to all of you....
Nana & PaPa

Shine on little ones! Shine on!!!

I've heard so many great things about Signing Time. I need to get one for Ava. Lucy is a miracle!

I've been following Maryn and praying for her. It's heartbreaking.

We LOVE Signing Time too!

What a beautiful song and pictures you posted. You consistently make me cry. Love ya!

Thank you for sharing the beautiful song. Marisa is one example of a little girl who SHINE'S!