It all makes sense now. Duh!! 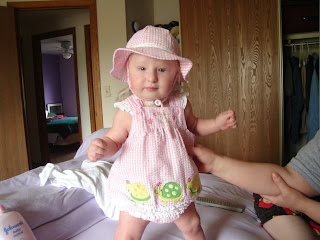 A couple of months ago we would look at Marissa and ask her to say "Mama" and "Dada" and she did. Since then she has only been saying those words while she is babbling, not purposefully. Recently, when we sit her down and ask her to say those words, she says "Rara". We try to pronounce them very slowly and deliberately, but still all she can say is "Rara" for both Mama and Dada. I was getting concerned last night until I remembered my sister Michelle had similar problems as a toddler. I brought it up to Jeremy and he told me he also had speech issues as a toddler. Well, both Michelle and Jeremy had recurring ear infections and had tubes placed. After they got their tubes, their speech improved. This is because they were hearing the words incorrectly before they got the tubes! Ear infections are due to kid's ears filling with fluid and not being able to drain properly. Can you remember going swimming as a kid and getting water in your ears that just wouldn't drain? All day long it sounded like your head was still under water. This is what is happening to Marissa. She is pronouncing the words just like she is hearing them!
Poor Kiddo! August 8th can't come soon enough.

Great blog!!!! IT'S ABOUT TIME!!! (j/k!!) It looks great- love the pics and vids- especially the one of her rocking out. Maybe this weekend she can teach Faith to dance!!!!
See ya soon!
Jen :)

She is SOOOOO cute!! Don't worry too much about her pronunciation of words..that will change with her tubes and being able to hear properly...I just wish I was there to give her lots of kisses and hugs!
Love,
Nana

Jeremy use to call me Mop - He couldn't hear soft sounds like the M at the end of mom. He called Lynne Lye, Robert was Waboo, Wendy was Wooby and Troy was Toy. To test his hearing I sneak up behind him and whisper, "Jeremy, you want some ice cream?". He didn't move a muscle - and this kid loved ice cream. That's when I knew he wasn't hearing. Jeremy had tubes put in 3 times.

I think he still calls me Mop sometimes.

When Marissa takes off there won't be any shutting her up or slowing her down. This child is committed!! Give her a big kiss from her Grandma in Utah.

Love you guys so much.
Mom