I know that it is still a week and a day until Marissa turns two, but I just could not delay posting this video any longer.  I have had this particular montage in mind for several months now.  I wanted to do this in honor of Marissa's upcoming two year celebration.  I have been putting it off because  1.  I had plenty of time and  2.  I needed J to help me convert our 8mm videos to mpeg.  Of course, in the meantime, a couple of my blogger friends beat me to the punch! (Go check out Debbie's and Michelle's montages, they are awesome!)
There are a lot of moments in Marissa's 2 1/2 month NICU stay that we did not capture on film, for whatever reason.  Sometimes, we just didn't remember to bring the camera.  Sometimes, things were just too hard and scary to film.  For example, we only took pictures and video of her on the ventilator the first time.  She was intubated ten different times, two of those being emergency re-intubations after she self-extubated.  Each time she was intubated, another piece of my heart broke.  It was just one more setback, one more time to have to see her drugged up so she wouldn't "fight the tube", one step closer to the trach.  We didn't exactly feel like documenting the experience at the time.
Looking back through the videos, I wish we had more of that time captured on film.  I will always have the memories  burned into my brain, but I find it so cathartic and therapeutic to be able to watch videos and see where Marissa was compared then to where she is now.
OK, enough said.  Grab a whole box of tissue and enjoy...

So beautiful! I just love that song! I haven't figured out how to use my own song yet.

Oh man....I just can't believe how much I love her!! I feel so lucky that this special little girl is 3/4 ME!!! I need to see her soon because I am having serious Marissa withdrawls. I cannot wait till she is old enough to understand these videos :)
Auntie Katelynn

Gosh, what a beautiful little miracle you have and she's such a little fighter to. I cant believe how much she has overcome and all that you as a Mother have been through with her. It breaks my heart but at the same time fills me with joy that she is here. She is my favorite little girl out in blogland. I love the video, love the song, LOVE your blog!

She is so sweet! Thanks for sharing your lives with us.

Gush...... I kinda forgot about some of those videos. Thanks for posting this.

Wow, That was a tear jerker, for sure! What a long road you all have traveled. It's amazing to watch that and see the goofy, happy, dancing, walking, precious little girl you have now. ((Huge hugs)). What amazing people you are.

Simply amazing! I know only a fraction of what you feel. The oxygen tubes and all the wires etc. Makes our NICU and hospital stays seem like just a pin prick compared to what little Marissa and the family has gone through. But I actually thought the video was very uplifiting. You guys were always smiling and caressing her and I had tears in my eyes as you were carrying her out of the hospital and into the home. I'm sure that was a very surreal moment for you. She is finally getting to come home.
Thanks for sharing.

Well guys, I've decided to buy stock in the Kleenex company...lol....you're right...I've gone through a few tissues already! It's hard to go back in time to those uncertain days..the emotions of not knowing at times, whether she would even survive at all...not knowing what would help her TO survive or what uncertain, unknown situation would come about next. But God has had..and continues to have His hand in ALL of the last 2 years of this precious little spirit's life, that has grown and overcome SOOO many challenges and is such a DELIGHT and miracle in and of herself, that I count our blessings EVERY day for God giving all of us this wonderful, delightful little girl. She has grown and developed into a beautiful, vibrant, active, funny, entertaining little girl that brings a smile and a belly laugh to each day! Yes, Marissa challenges you guys as parents with some of her shannigans....but....what would partenting be without those challenges?.....BORRRINNNNG!!! LOL Thank you for sharing with us. Give yourselves and Rissa Roo a big hug and plenty of kisses from Nana & PaPa.
Love to all,
Nana & PaPa

P.S. Sorry for the mispelling. Can't find the word in the dictionary, so I'm spelling it phonetically... shananigins...meaning playing tricks, doing something on purpose that annoys others, doing something that you know is wrong but will do it anyway just to see what happens...etc...lol...you got the idea...Love, Nana 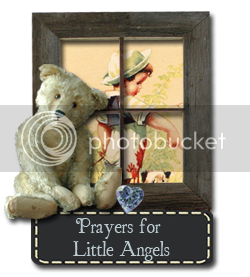